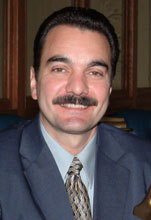 So I’m out of the state for a couple days with my family and boom!  The gas tax makes it’s ugly return.  Speaker Vincent Prieto and Senate President Steve Sweeney got together and came up with a scheme to raise your taxes…again.

What’s even worse is that they are calling it a tax cut.  Sound familiar?  It’s not.  They will raise the cost of buying gas in the Garden State by $.23 a gallon and then through an elaborate and confusing pitch to distract you, make you think that because of tax deductions and a cut in the estate tax, you’re actually making money!  It’s disgusting, dishonest and deceitful.  And that’s not even the worst part…

The big issue today is that there are reportedly many Republican legislators who are considering voting to override the Governor’s expected veto of the tax.  At least the Democrats are being honest, they campaign on revenue and higher taxes.  But the GOP?  They ask for your votes by proclaiming that they will be the strong voice of the people opposing further taxes on our already over-taxed citizens.  It’s gotta stop.  As Jersey Joe Piscopo put it on my radio show this morning, #StopIt.  You’re right Joe, how many more people and businesses need to leave the Garden State before the politicians do something to improve the economy and cost of living here?  Enough is enough.  #NoGasTax. Call your Republican legislators and tell ’em to get a backbone and vote against the tax and support the Governor if he vetoes this latest assault on your bank account.

This entry was posted in On The Radio, The Daily Point and tagged Gas Tax, Joe Piscopo, NJ101.5, Steve Sweeney, Vincent Prieto.