Sometimes A Ticket Is Just A Ticket

The idea that a town is profiling drivers for tickets based on race has been raised many times in the post-Ferguson media world anytime a group or politician needs a headline to show how racially sensitive they are compared to the rest of us.  The latest foray into race-baiting false narratives comes from the New Jersey town of Bloomfield where a bunch of college kids at the behest of their college professor sat in traffic court and passed judgement on a police force for writing a disproportionate number of tickets to minority drivers.  Not disproportionate to the number of traffic violations, not disproportionate to the high traffic areas where the tickets were issued, disproportionate to the racial makeup of the town itself.  Gimme a break.  Since when do traffic stops have to reflect racial diversity?  I thought traffic stops had to do with people breaking traffic laws?

After Rohan Mohanty presented the story on the Chasing set today it was clear to me that the professor was looking to push a narrative of racial profiling without regard for the overall picture of law enforcement, traffic patterns and the fact that the cops might just be doing their job to keep the roads safe. 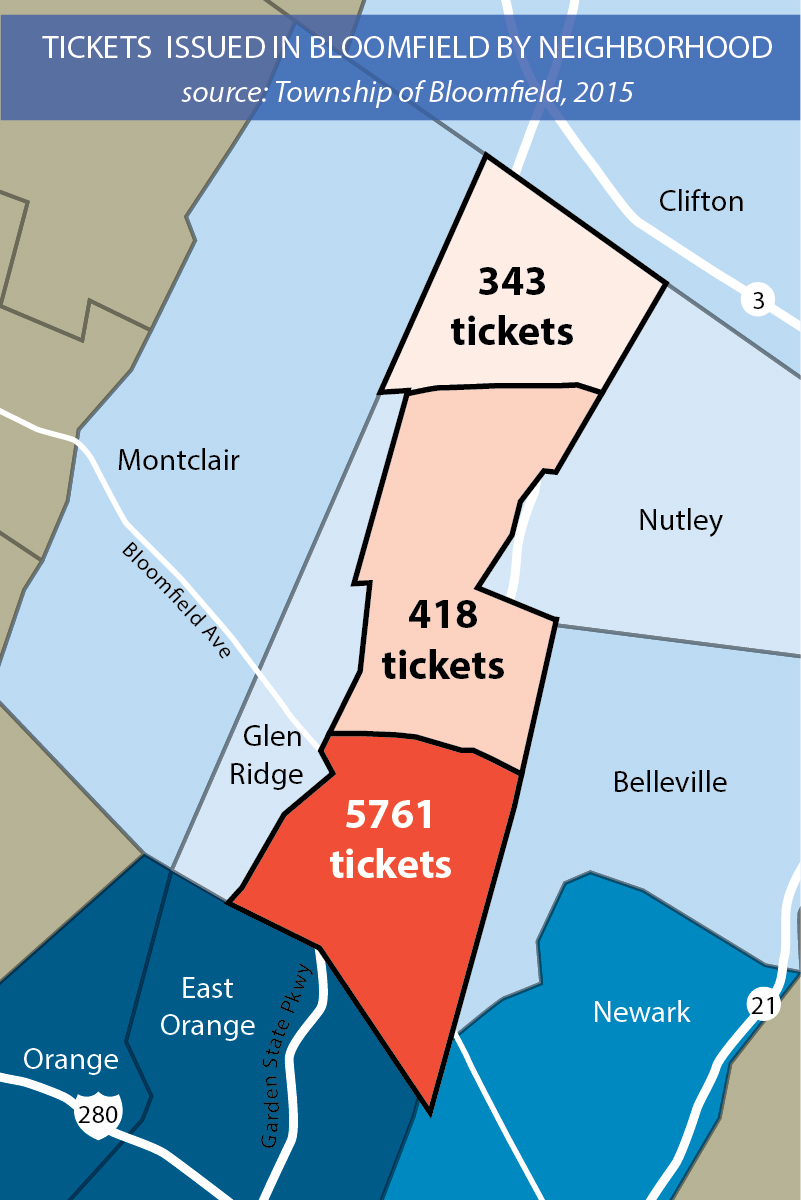 First of all the ‘study’ done by a small group of Seton Hall students uses 70 hours of observed data from visits to traffic court.  The conclusion was that with a higher number of minorities showing up in court the cops must be profiling minority drivers.  Huh?  First of all, by New Jersey standards, Bloomfield is a very diverse community.  The ‘study’ paints a picture of an overwhelmingly white community when it fact it’s more diverse than the average across the state of NJ.  The town of Bloomfield also  borders East Orange and Newark on the southern end which also happens to be the location of one of the busiest roads in Northern NJ, Bloomfield Avenue.

No mention of the high volume of traffic and the fact that many drivers on Bloomfield avenue are passing through Bloomfield and not necessarily residents of the town and may in fact be residents of the adjacent town who have a much higher minority population.  Either way, why do the academic leaders at our universities and their shills in the media immediately jump to a conclusion of race based policing without more than anecdotal observations to back them up?  The irresponsibility of the professor and his student accomplices knows no bounds. We’ve seen this before when the Princeton professor claimed to be racially profiled on her stop in Princeton while traveling 67 in a 45…turned out, thanks to a dash cam, that wasn’t the case.

The Police Director in Bloomfield, Samuel DeMaio, who let Rohan take a ride along for the story, was also quick to point out that the study was flawed and lacking in complete information.  Director DeMaio also happens to be the former head of the Newark Police department so he’s got credibility, expertise and experience.

DeMaio argues that the stops are all legitimate. “There is no violation that is too small,” he said. “We can name countless jobs where a stop for a small offense led to seizures of guns, drugs and people wanted for felony crimes.”

According to police department statistics, of the 39,991 citations given out in Bloomfield in 2015, the most common were for:

Just looking at the number of tickets that were issued for parking.  More than 16,000 (and that’s not counting any in the category of “parking and unregistered vehicle”.  That’s more than 40% of the total tickets.  Can someone explain how a car is racially profiled for being illegally parked?

There is also no accounting for how many more times a person with a lower economic might be inclined to fight a ticket they can ill afford in court compared to someone who’s got the means.  Maybe this is a study on the income level of people showing up to court to fight tickets more than anything else.

As for me, I’m sick and tired of academic elites trying to create a narrative of racial tension and controversy when clearly none exist.  Enough of the pandering to these ignorant pseudo-intellectuals who would have you believe that everything comes down to race relations.  Sometime when you drive without a registration and park illegally you’ll get a ticket.  As you should.  Thanks to the Bloomfield Police for not apologizing and caving to this nonsense and embracing the press to show how well they are maintaining safety and security in their community.